We are closed on the 24th, 25th and 31st is December. Do not hesitate to visit us any other day these Christmas!

Yakitoro is a venue inspired in the traditional Japanese yakitori tavern. We have added a Spanish touch and interpreted it in our particular way, so that it is all very familiar and very much our own.

The traditional yakitori is skewered chicken, very popular in Japan, cooked on the spot on a charcoal grill. At Yakitoro we cook brochettes in our own special style, making them very tasty and affordable.

On stepping into Yakitoro you enter a light and open-plan space, with tables placed around the charcoal grills where the chicken skewers created by chef Alberto Chicote are cooked to perfection. Drinks are cooled in the ice basins in the middle of the table. At Yakitoro, everything takes place around the customer, fire and ice alike.

Our history to the present day

Yakitoro was born out of a trip to Japan, from which we came back convinced that the yakitori traditional tavern could be adapted to Spanish cuisine. The challenge was to make Spanish recipes in the yakitori style. In short, a way of eating tapas on a skewer, all charcoal-scented and with Spanish flavours. Alberto Chicote has made this possible since June 2014 at the establishment on Calle de la Reina, a perfect blend of Japanese and Spanish cuisine where the charcoal-grilled ‘yakitoros’ are the signature dish, making Yakitoro a unique tavern. Now, with the new venue at Castellana 130, the story continues.

Yakitoro is the combination of the Japanese word "yakitori" (焼き鳥), the Japanese brochette, and the word "toro" (bull in Spanish), the most widely recognised symbol of Spain.

Gift Card of 1 menu with food and drink at Yakitoro 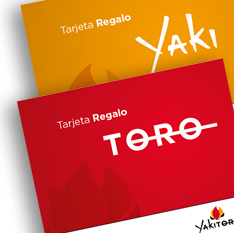